This blog will not go into a huge amount of detail on the technology of neural networks and how they work but will try to explain how the technology could be beneficial to an organization.

Introduction to the terminology

AI – Artificial Intelligence, this is a concept that has been around for many years and at a very high level simply means allowing a computer system to make a decision using input based upon data that it understands.

ML and DL – Machine Learning and Deep learning are very similar and interchangeable concepts; it is a terminology that many people will have heard related to any AI discussions.  A good article I found when researching content for this blog post states Machine Learning consists of,

“Algorithms that parse data, learn from that data, and then apply what they’ve learned to make informed decisions”

Conceptually where deep learning differs is an artificial neural network is used that can be trained and will allow a system to start making its own decisions based upon previous training and experience.

In a real-world scenario, this may mean showing many images of a single object to the system to allow it to make informed decisions on that object even if it is not exactly the same image in the future, but also remember the new image for future reference if it was correct.

Computer Vision –this has also been around for a long time, one of the best-known images/object recognition systems or technology often referred to as Computer Vision would be Google Goggles or more recently Google Lens. Image or Object recognition can be ‘trained’ into a Deep Learning neural network by showing many of the same images of an object to ‘train’ the solution to achieve the goal you require.

What are the applications of this technology?

I will also reference Wikipedia on this as I think it defines perfectly the different commercial and industrial uses for this technology.

What is the future of Deep Learning and Computer Vision?

From my own personal experience, it is actually a hobby of mine, and as the technology around GPU’s (Graphic Processing Units) becomes cheaper and more available to small to medium enterprise companies and even hobbyists, the ability to create your own deep learning and AI solutions becomes more available.

One recent technology we have been investigating is Jetson Nano SBC/Single Board Computers (although some people would argue it is not single board) entry-level high GPU performance computer boards like this open up the world of deep learning and AI to a much wider audience. 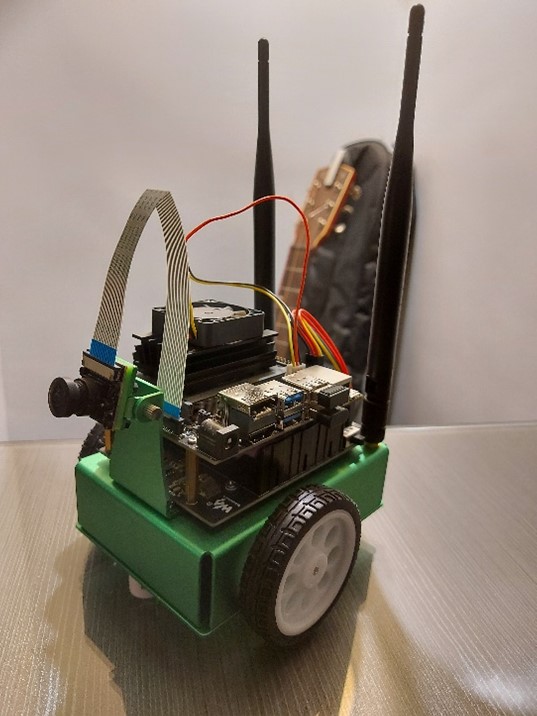 This is my own Jetbot I have built that consists of a Jetson Nano board, a secondary board to interface with motors, a front-facing camera, and Wi-Fi capability.

It may look like a toy but the capabilities of this technology could be transferred to many different industries, currently, I have only trained its Deep Learning abilities to recognize my dog and follow him around, which he is very confused about.

A graphical representation of how Image classification works could be represented by the below, again referenced to an article whilst researching for this blog.

Many thanks for taking the time to read this post if you made it this far, and at Mekkanos we are trying to advance AI and Deep Learning to do much more than follow a dog around!